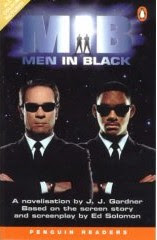 Aliens and humans live in peace together. Kay and Jay are two of Men in Black who look for aliens and watch them on Earth. One day, a Bug lands on New York and Kay and Jay have to find it before The Bug finds the Third Galaxy. Bugs kill Allien and people, it is important to discover where it is. The Bug looks for the Third Galaxy and kills an Arquillian and a Baltian called Rosenberg and takes Dr Laurel Weaver as a hostage when he finds the Third Galaxy on Rosenberg's cat. It is inside the jewel on the collar of the cat. Kay and Jay go after it to the two world's Fair building where there are two space ships. The Bug wants to take one and scape, but they destroy it. They have avoided the fighting between Baltians and Arquillians.

This science fiction story is an amusing one. I don't believe aliens exist but if there were some it would be very scary because we couldn't feel safe on Earth any more.
Francisco José Felipe Pérez (4ºB)
Publicado por Biblioteca Chomón en 18:53