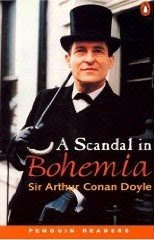 A Scandal in Bohemia.

The Boscombe Lake Mystery is one of the stories of the book which I like best.

Sherlock Holmes is investigating the mysterious death of Charles McCarthy. The police thought that the killer was James, Charles McCarthy’s son, because somebody saw both of them arguing in the lake, before the father died. But Alice Turner, James’s friend, spoke with Mr Holmes and she told him that James wasn’t the killer.

Sherlock Holmes investigates the case and of course he solves it!

I think this book is very interesting because there are always mysterious things, and at the end Mr Holmes always knows how to discover the mystery. As there are a lot of stories in the book it is very pleasant.