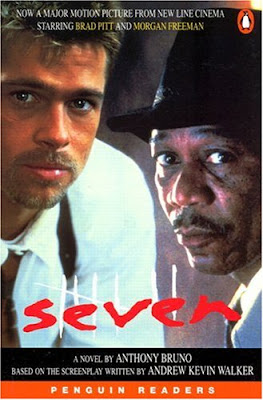 Title: Seven
Author: Anthony Bruno
Summary:
The book is about two detectives tracking down a murderer who kills people according to the seven deadly sins.
The first murder occurs with the sin of Gluttony, which kills a fat man; then Greed kills a lawyer; then Sloth has a man tied to a bed for a year and takes the hand to leave his finger prints in other crimes, with Lust he kills a prostitute and he forces a man to have sex with the dead woman. With Pride he kills a girl in her room; with Envy he kills the wife of the detective and Wrath makes Mills kill him.
Throughout the book the detectives are going to find clues leading to the end of the story. The book ends with Mills (a detective) killing the murderer and being arrested by police.
My personal opinion of the book:
I liked the book, but I didn't expect the end. I would have liked it to end well. Mills and Tracy should have had the child.
Vanessa Tena Gil CS1A
Publicado por Biblioteca Chomón en 17:38