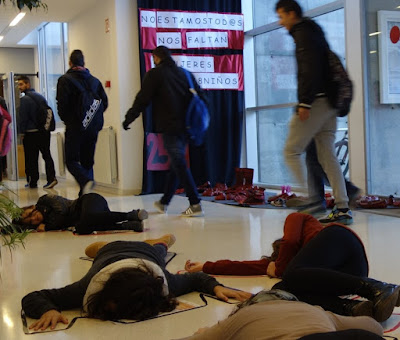 Gender violence is the rejection, discrimination or physical and psychological targeted at person of the opposite sex, normally to women. This is a big social problem that we can see every day in all the cultures around the world.
Everybody should be aware of this problem that affects a lot of people.
The campaign of the Red Shoes is interesting because it makes people know more about this problem, it is a good thing to show Red Shoes in the schools and other places.
In my high school, I had the opportunity to participate in this campaign.

In the morning, some partners and I were lying down on the floor simulating to be dead bodies, victims of this violence.
Aurora García
In my opinion, that is a very good idea because it is an attractive form and draws attention.

This iniciative began in Mexico and it was started by ElinaChauvet to visualize crimes in a Mexican city, crimes between couples.
In Spain the Gender Violence Day is the 25th of November, that day is important because there are many victims who suffer this problem and it is very important to end with it.
This iniciative represents shoes whose owner suffers abuse and this is the only one that connect us with this crime. The red colour represents the blood, blood that represents death.