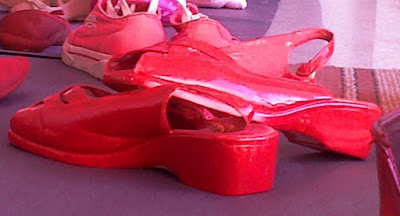 These last days when you entered in my school you could see a lot of shoes on the floor. Those shoes are part of a denunciation of gender violence.
My teacher explained to us that the shoes were red because it is an aggressive color and reminiscent of the blood.
I personally like the idea because every time that you walked down the hall I remembered that type of violence. But I think that it has something wrong because many times it is thought that gender violence is just that one in which a man hurts a woman and that’s not true, because there are some women who have a violent behavior towards men to. But the damage caused by these women is often more psychological than physical.
All that is to educate people about not being violent, it is something I support, so I think that red shoes is something very positive.
Blanca Vicente Ibáñez , CT2B
Publicado por Biblioteca Chomón en 18:40