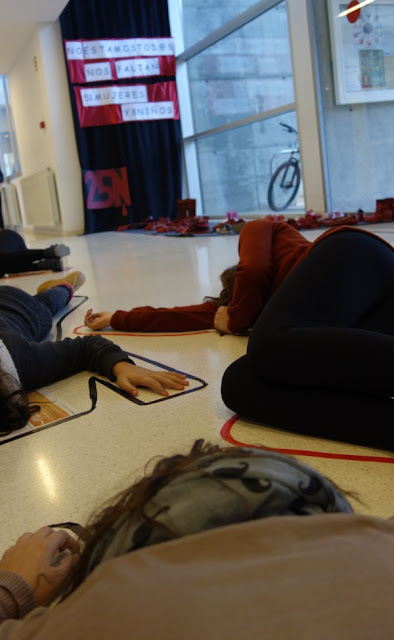 In my opinion it is an interesant campaign because it is very visual and meaningful, so that it makes us think about what has happenned.
The idea of bringing to our school was brilliant because that makes us feel the situation closer, and it is important because it is real, it is close.
But I think that there should be campaigns against male gender violence too, because the number of the victims is growing although the female's one number is bigger.
The campaigns are very important to our awareness in many aspects, so that they must be present and we must carry on fighting.
Gloria Chulilla


Gender violence is one of the most important problems in the first world society and we have to change it. People are more aware about this situation and they have began making campaigns against it, like the red shoes campaign all over the world to make people think it´s a good think to make this kind of pacific protests, but it isn´t enough: most people think that gender  violence is a really disgusting thing, but we have to cut this from the beginning: we have to change the attitude of the children and the teenagers who think that they can control their girlfriends, and the girls have to stop thinking that reading their private conversations, deciding what they have to wear and being jealous about their friends is romantic.
Beatriz Casas
Publicado por Biblioteca Chomón en 20:24