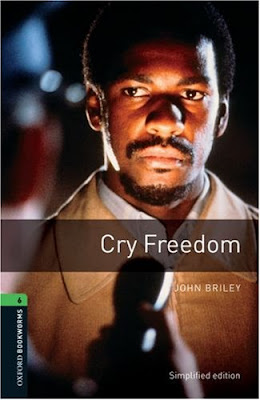 The students of the second year of Bachillerato read “Cry Freedom” by John Briley in the second term of the school year. This is the summary of the book and some of the students´opinions.

Summary
Sara Gómez
When Donald Woods, the Daily Dispatch newspaper's editor in East London in South Africa, met Steve Biko, a black leader, his life changed.
Soon they became close friends and Woods began to believe in Biko's ideas of equality and to know how hard the black people's life was in South Africa.
He helped Biko publish some editorials about equality in his newspaper and give work to two black journalists in his newspaper.
But the police of South Africa and the government didn't like it at all, and besides of banning Biko and his friends, arrested them.
Some of them died in prison because of the police violence, but the police didn't tell people the true story. They said all of them had died because of an accident or because they committed suicide, or, in the case of Biko, because he starved himself to death.
After the great funeral for Biko, Woods was banned, but he wrote a book about Steve Biko's life and death: The Truth.
Finaly, he and his family escaped from South Africa and flew to London, where Woods could publish the book and tell the real story of Steve Biko, who still remains as a hero for South African people.

Opinion
Julia Méndez:
This book is very interesting because it is a lesson against racism between human beings: blacks and whites. I like this book because I totally agree with it, there shouldn't be any differences between anyone anywhere.
Alba Larrea:
I like this book very much because it shows perfectly how people defend and fight other people's rights and beliefs without receiving anything in exchange. It also makes me feel sad due to the way in which people treat other people cruelly just because they have a different skin color. Nobody should have the control on anybody.
Alejandro Español:
I think this book is really good and realistic because the author tells you the real situation between white and black people in South Africa during the apartheid. So I can say that this book has made me feel very sad and made me, also, think about how I must consider all the people I´ve met and I will get to know in my life.
Cristina Azuara:
I think this book shows the situation in South Africa in the 90's but in my opinion, it would be interesting to read this story from another point of view, different from Biko's o Mr. Kruger's view.
Daniel Traver:
I'm proud of having read this book because it shows the real things which happened in South Africa. I think it's easy to read and it makes you be interested in reading it to know what happens with the characters. Other thing I like is that it's based in a
true story, which means it's more interesting and real.
Vicky Barrado:
I like the book because the story is about a man who fights for his convictions and he isn't afraid of dying. He's very brave and I like people who defend their ideals and don't care about the consequences for themselves.
Lucas Barea:
I like this book because it's different from the books I usually read. I have learnt a lot of good things from this book like the importance of the freedom which maybe people don't appreciate because they don't realise how horrible the life is without it. However, I don't like the end of the book because I think that it's very simple and I recommend it to young people who like books of "real"adventures.
Beatriz Muniesa:
From my point of view this book hasn´t been just a book, its story has made me feel sad and disappointed by the inequality and the racism that has existed and continues existing in the world nowadays and by the unequal distribution of the wealth and the corruption in the countries. But it has allowed me to have a different vision from the world and has opened my mind.

I think that the book offers a good example about the system that white people established in South Africa and about the apartheid.
I think it is a very interesting book and I've learnt some things.

I really like this book because it shows how people fight for a town’s freedom. I admire Biko and Woods who risk their lives to help black people and to defend their beliefs. Although it is a sad book I recommend everybody to read it because it makes you appreciate all the rights and freedom we have nowadays.